Coveted collection pieces from OLE LYNGGAARD COPENHAGEN tend to intertwine with our passion for rare gemstones of incredible lustre. Our high-quality standards naturally entail an on-going search for those special stones in irresistible tones. All precious stones are carefully reclaimed from caves and mountains or underneath deep blue seas across the globe. They may share a shade or nuance, but each individual stone is absolutely one of a kind, making every single piece of fine jewellery perfectly unique. 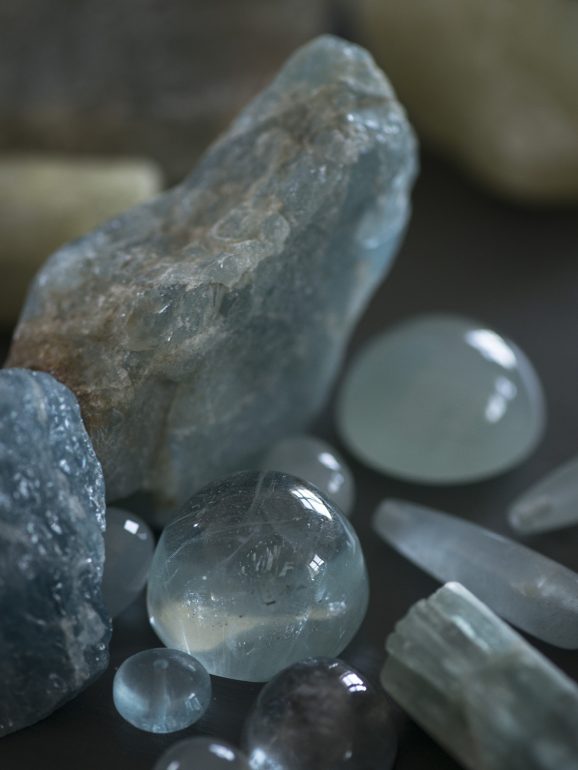 Aquamarine is a popular mineral gemstone named after the Latin word for seawater. The stone is available in colours varying from pale translucent blue to a dark opaque green. Aquamarines are prone to slight inclusions, which makes retrieving a very large high-quality aquamarine something of a rarity. Inclusions are not to be considered defects in the stone. Aquamarine is said to calm waves, thus keeping sailors safe at sea. Today, the stone symbolizes eternal youth and happiness. Aquamarines are primarily sourced from South America and occasionally also from Africa and India. 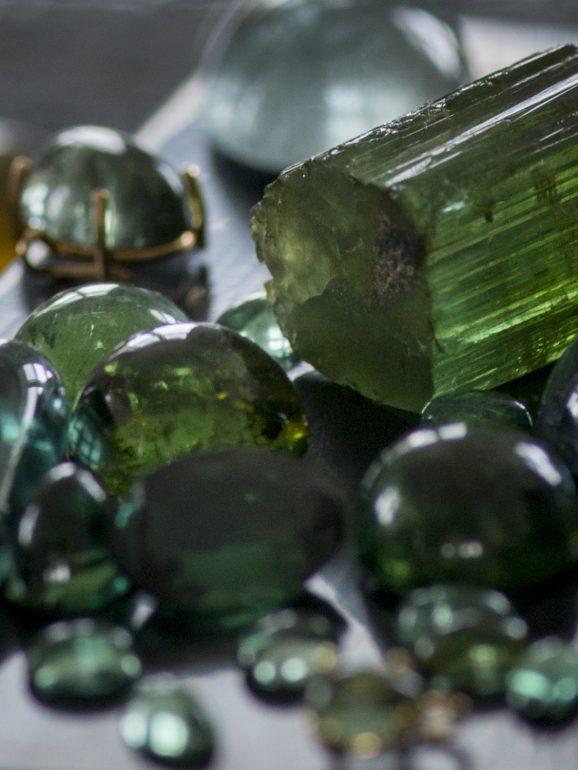 The name tourmaline comes from the Sinhalese term turmali which was the name given to all coloured crystals on the island of Sri Lanka when the stones were first retrieved as early as the late 1600s. Tourmaline exists in all the colours of the rainbow, however pink, red, green, blue, and multi-coloured tourmalines are the most well-known. A pink-reddish tourmaline is referred to as a rubellite, whereas chrome tourmaline is of an intense green colour. Tourmaline is a fairly soft stone, and visible inclusions are a common characteristic of the light-coloured tourmalines. Initially, the gemstone was praised by alchemists because of its pyro-electric effect – why it was believed to be related to the philosopher’s stone. Tourmalines are sourced from South America and Africa. 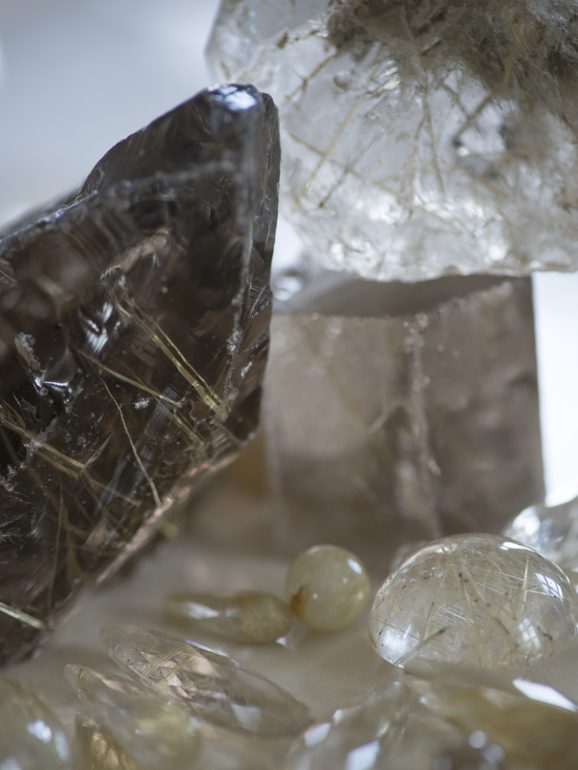 Quartz with glittering inclusions of crystal threads is referred to as rutile quartz or rutilated quartz. The colour of rutile quartz ranges from almost transparent over brown, to red and golden yellow. Rutile, as often referred to as “Venus’ hair” or “angel hair”, appears inside the stone, and their size and structure will vary from clusters of delicate threads to a few crystals as wide as needles. Contrary to other precious stones the inclusions make this particular quartz desirable. Golden rutile quartz is said to amplify a person’s thoughts and the ability to manifest one’s desires in life. Rutile quartz is sourced from South America. 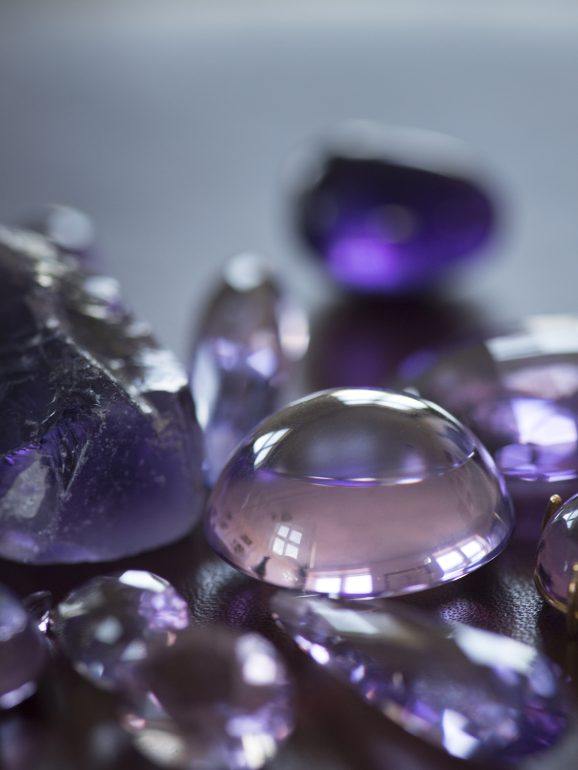 Amethyst belongs to the quartz family. Since Ancient Greece, the delicate hues varying from pinkish lavender to deep purple has made amethyst a treasured gemstone. Today, the most exclusive colour is medium purple with red secondary hues. Amethyst is said to provide the wearer with balance, calm, patience, and peace. It was once considered more precious than diamonds. Amethyst is sourced from South America. 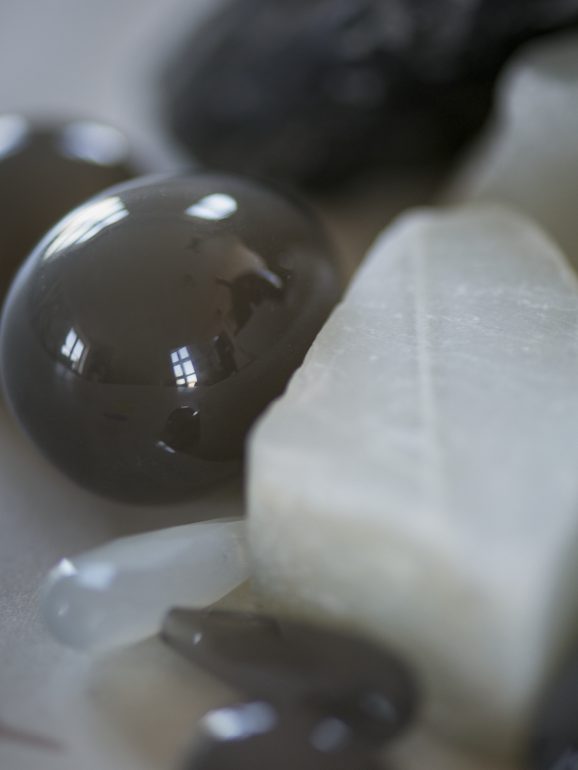 The delicate beauty and the glowing appearance of moonstone makes this precious stone coveted across the globe. Moonstone exists in a large variety of colours, from silvery white to light peachy blush to nuances of grey. The poetic name refers to the almost unearthly sheen of “moonlight” in the stone. As an amulet, moonstone is said to bring good luck, to protect travellers, reunite quarrelling lovers, and show its wearer the path to inner strength and wisdom. Legend has it that if a moonstone is put in the mouth during a full moon, you can see your future. Moonstones are sourced primarily from India. 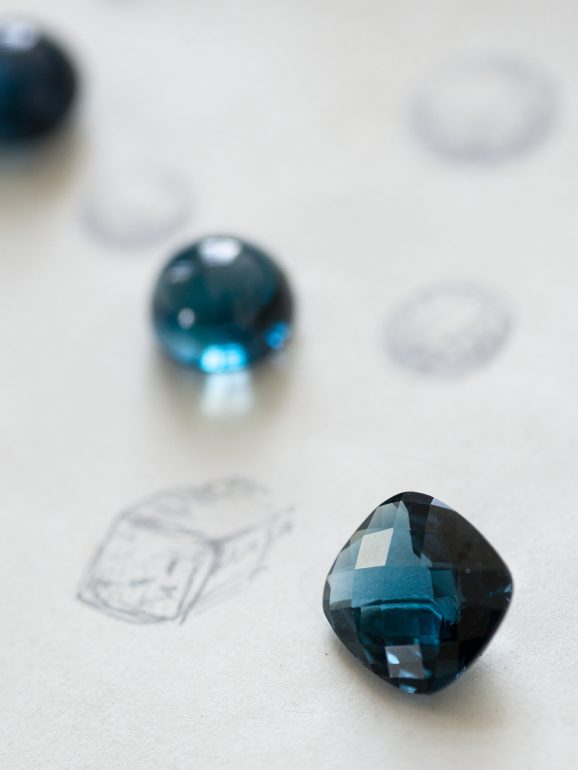 The word topaz is said to originate from Topazos, a mythological island in the Red Sea, where the first topazes allegedly were reclaimed. Natural topaz is most often colourless or brown, and as a natural product the popular blue topaz is actually very rare. Almost all blue topaz has been through a process of colour treatment, and although this remarkably coloured gemstone is of very exclusive appearance, topaz is in fact an abundant material in nature. The cherished London blue topaz varies from the steel-bluish tone to a petrol-blue, and some London blue species even have a slightly greenish tone when viewed from certain angles. Topaz is believed to bring success and good fortune. Blue topaz is sourced from South America and Africa. 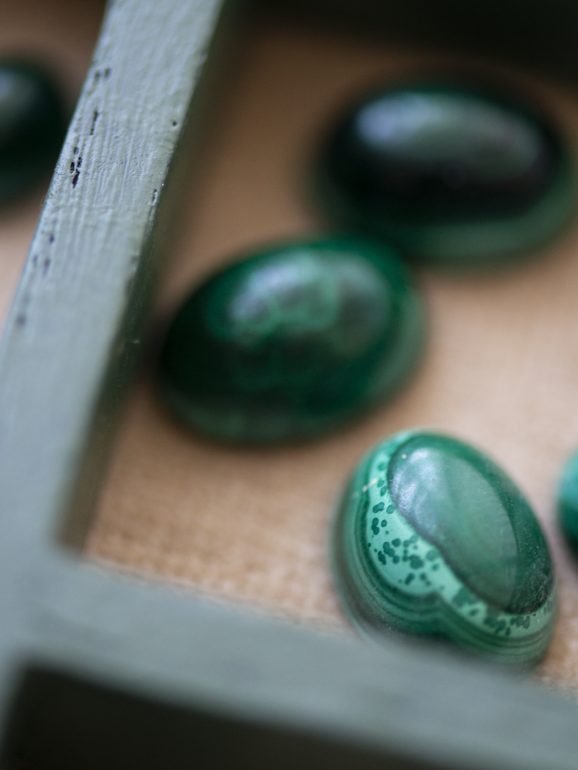 Malachite is a green copper carbonate mineral. The name malachite probably originates in the Greek term malakos, meaning ‘soft’, as the stone is relatively soft. Despite the softness of the stone surface, it does retain a beautiful polish. Malachite has distinctive stripes in varying shades of green, making it very interesting to behold. It typically occurs in nature in large formations of grape-shaped elements. In ancient Egypt, Rome, and Greece, where the colour green represented vegetation and life, malachite was extremely coveted in solid stones for jewellery and amulets as well as powdered form for eye shadow. Symbolically, malachite is said to absorb negative energies and polluting elements. The stone encourages communication and emotional freedom, while teaching empathy and responsibility for thoughts and actions. Lastly, it is a practical companion for traveling, as malachite is said to protect, to overcome fear of flying, and to diminish jetlag. Malachite is sourced from Africa. 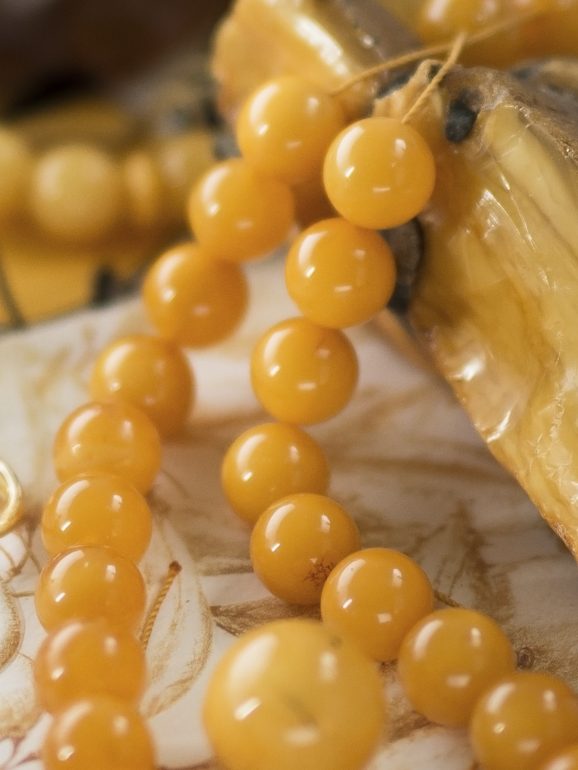 Often referred to as “the gold of the North” the word amber traces back to ancient Greek and means beaming sun. Amber is fossilised tree resin, since ancient times coveted for its amazing colour hues and exotic beauty. Developing over a span of at least 1 million years, finding inclusions of plants or small animals inside a piece of amber is not uncommon. Translucent or opaque, amber exists in a vast range of different burned colours, from pale yellow and golden honey to orange and reddish brown. For centuries the gemstone has been used in natural medicine for its alleged healing properties and as a popular ingredient in perfumes. Amber is considered a potent healing stone with the ability to diminish stress, release all negative energies and clear the mind of phobias and fears. Amber should not be exposed to oils, lotions, perfumes, etc. Frequent exposure to sunlight or heat will also put the coral at risk of losing its natural shine. Amber is sourced from Europe.

Pearls are some of the most coveted gems in the history of the world. Pearls come in a wide variety of shapes and sizes and are produced under very different conditions. OLE LYNGGAARD COPENHAGEN embellishes fine jewellery with several different types of pearls.

South Sea pearls are some of the world’s largest pearls compared to other types of pearl. They are cultured using the Pinctada Maxima oyster, whose natural habitat are the waters of the South Sea. The Pinctada Maxima oyster is of a size considerably bigger than other mollusc family members. This also allows the pearls to grow larger. The growth period is substantially longer for South Sea Pearls compared to smaller pearls. Typically, a minimum of two years is required to obtain the desired pearl size, but some pearls may take as long as four years to cultivate. South Sea Pearls are sourced from Australia.

The term Mabe is pronounced mar-bay and derives from the Japanese ‘mabe-gai’, the word describing the Pteria Penguin oyster, which is often used to produce mabes. A Mabe pearl is a cultured blister pearl, usually quite large in size, varying from 12 to 20 millimetres in diameter. The pearl is produced by attaching a tiny hemispherical nucleus to the inside wall of a mollusc. The growing process takes from six months to two years, much depending on where and in which oyster the pearl is cultivated. Once complete, the half pearls are cut from the oyster shell with a diamond-tipped saw, and the nucleus of the pearl is removed. The inside of the pearl is scraped to remove organic stain before filling the empty shell with resin made of crushed pearl. Finally, a round disc is cut from the remains of the nurturing mollusc and glued to the back of the pearl to complete the nacre exterior.

The Pteria Penguin oyster creates iridescent hemispherical pearls in tones of pale pink, blue, and green. Mabes that are cultivated inside the Pinctada Maxima oyster usually used for South Sea pearls (see the paragraph above) – are white or silver, but they also exist in golden hues.